In 2020, the Downtown Kinston Mural Program Selection Committee chose a group of artists to create a collection of public murals in our downtown. The resident-led Mural Selection Committee spent several months of discussion to select a group of artists diverse in style, content, background, location, and experience. Below is a record of the selected artists' professional website, mural, and their Virtual Artist Talk/media coverage. 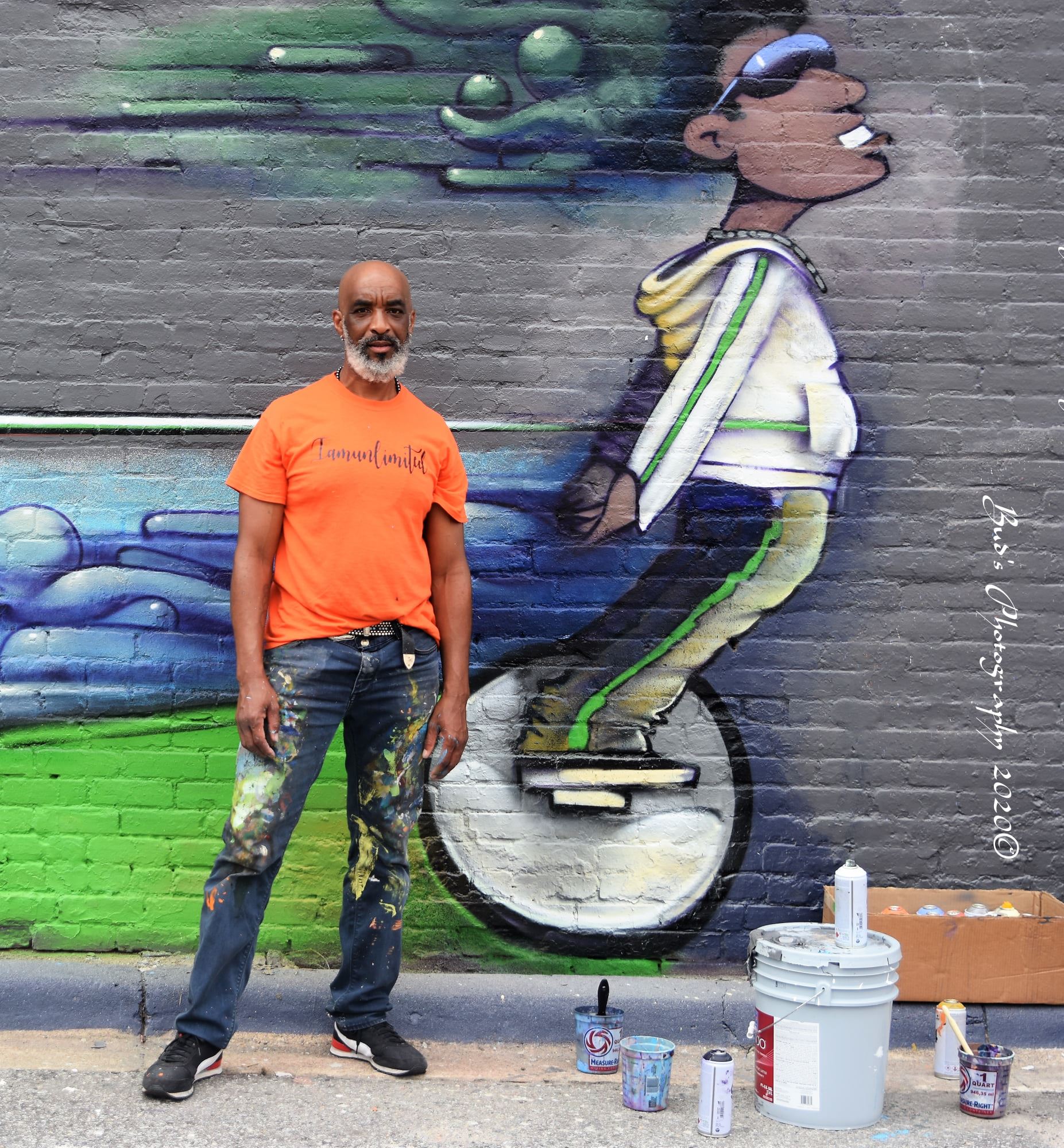 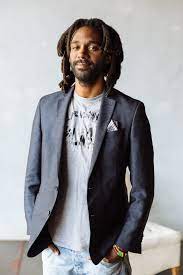 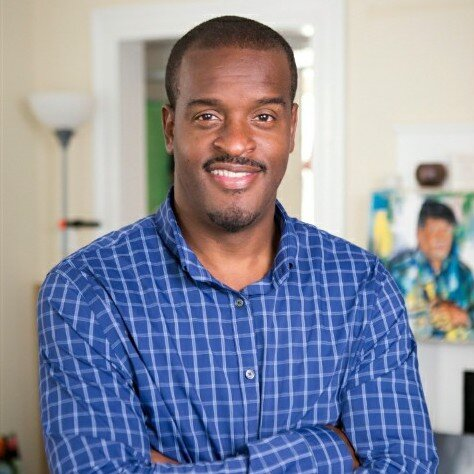 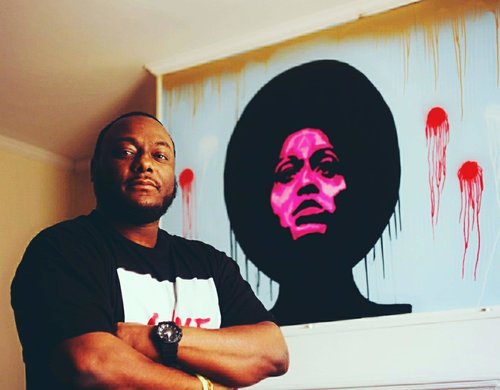 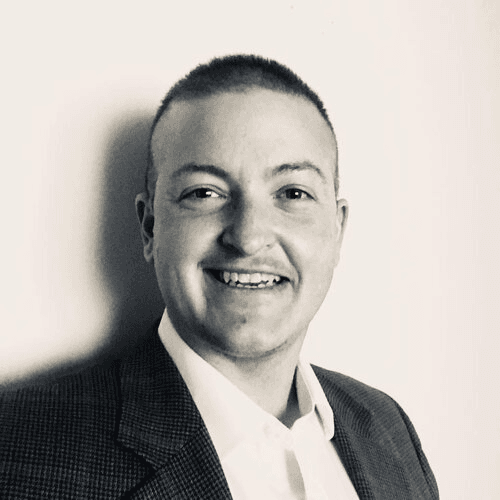 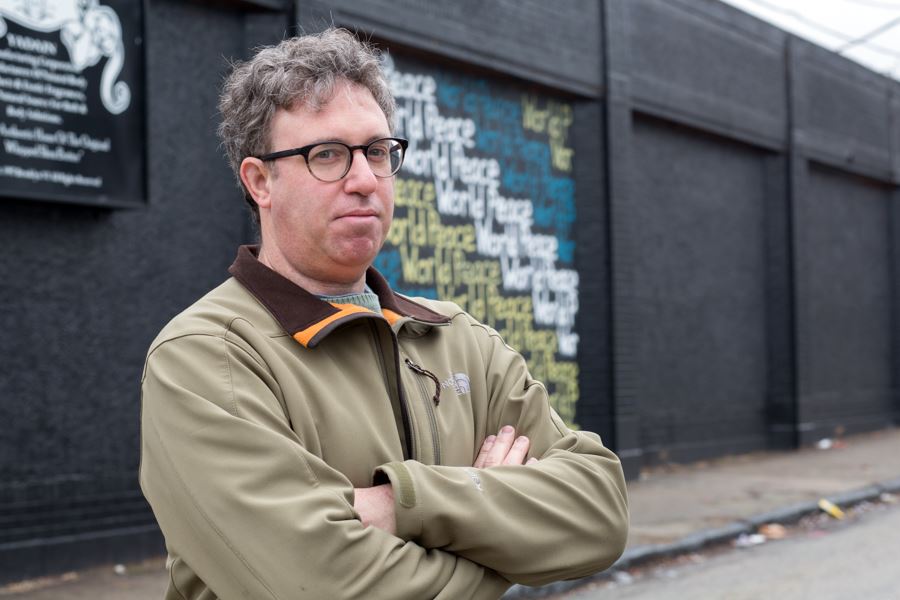 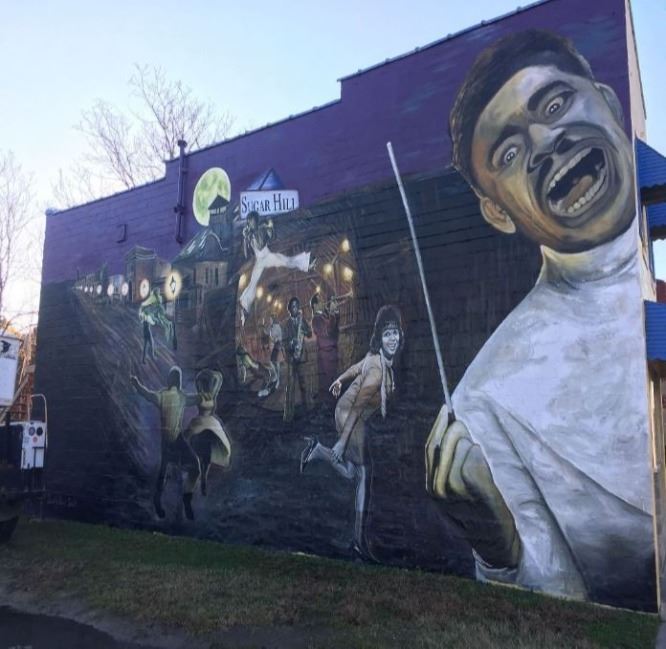 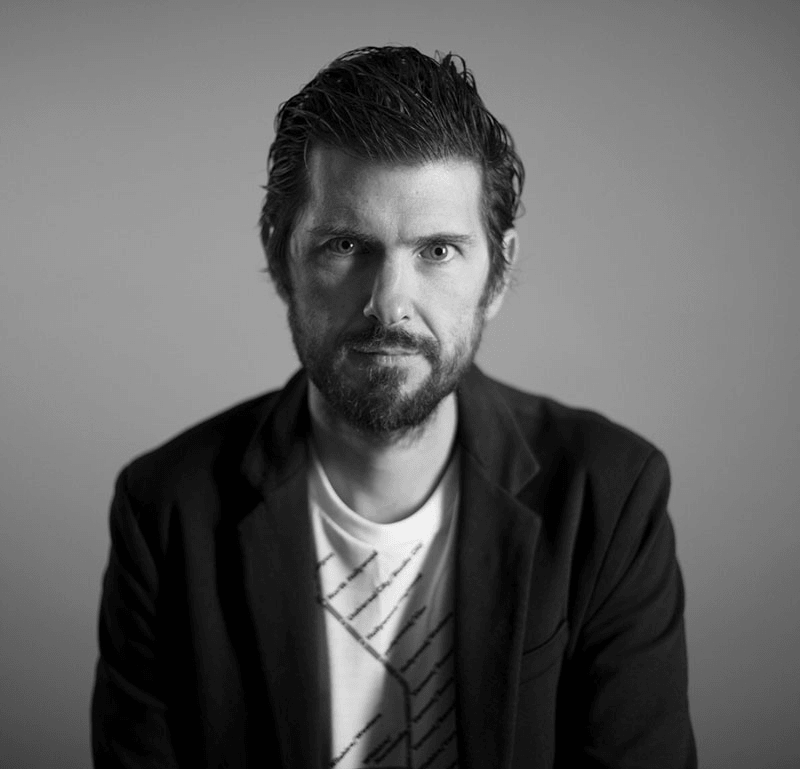 In Maximillian’s words: I knew it was an important project as soon as I heard about the concept. Hearing from Mr. Dudley showed me how important it is to preserve the story and use it to empower young people to have the confidence to do similar things now. I wanted to share the story of the Adkin High School Walkout, but use symbols of pride and confidence to share the spirit of the moment as well as the facts. I think it will also be very insightful, and it will be important for people who don’t know this part of Kinston’s history to learn it. It was a fun project, I enjoyed working with my friend Jamil, and I think it will make a great impact on the community.

In Jamil’s words: I really enjoyed the experience, and any time I get to work with Max is a good thing. The movement itself, especially led by children, was a brave step for them to take their future in their own hands. I want people to feel the enormity of what they did, and to feel that respect. When you look at the images, realize what you’re looking at is a lot of symbolism, but the story and the statement of the walkout should be respected. 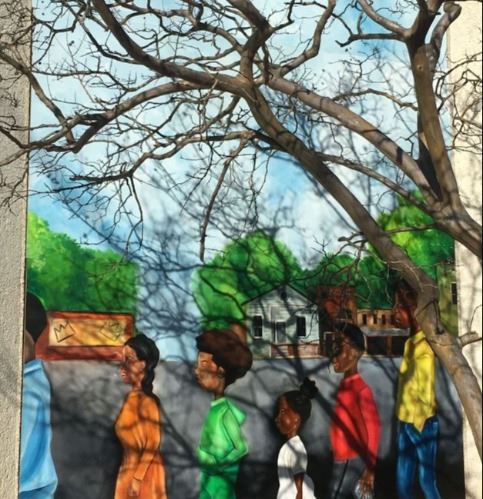 “The March” shows students walking in procession down the street. In Jamil’s word, “to show they were walking as one heartbeat, going about the task at hand”. The expressions on the students’ faces are an attempt to capture the emotions the students were feeling as they were marching. 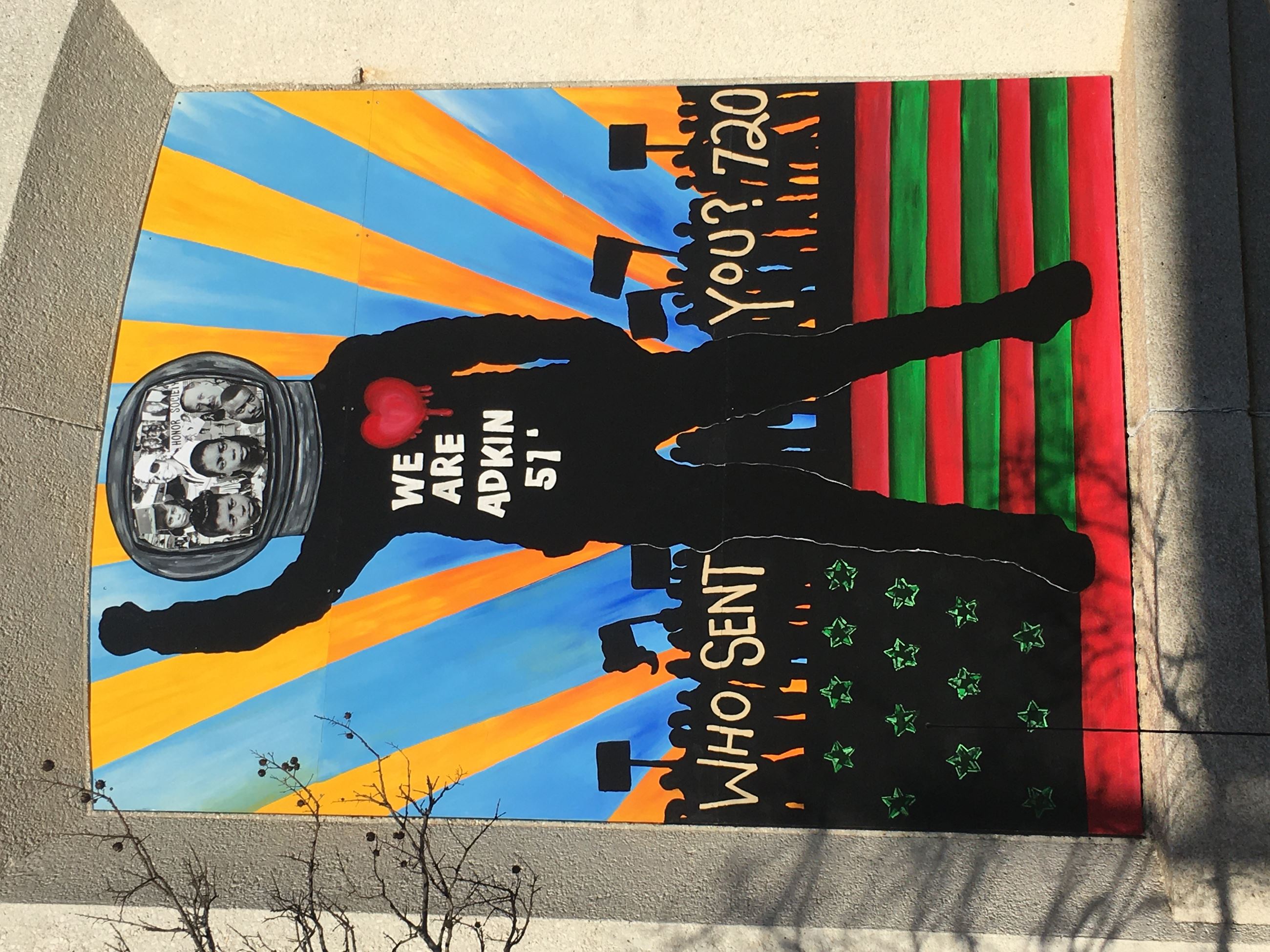 “Who Sent You?” shows the silhouettes of the 720 students who participated in the walkout and sun rays of hope emanating from them. The colors in this mural are the same as the Pan-African flag, and the liberation colors of black folks in America—red for blood, black for skin color, and green for the African continent. The mural also centers on a student with an afro that is a collage of student photos from Adkin High, representing new horizons and pioneering students. 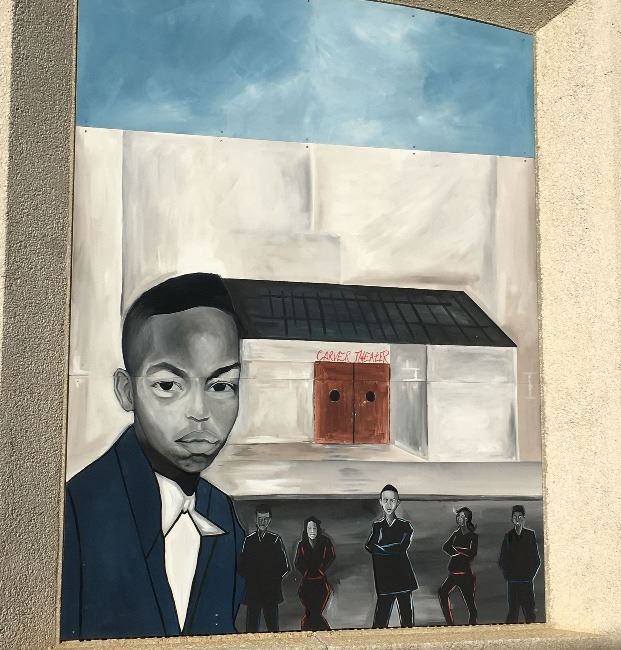 This panel shows the Carver Theater where the students met after the march; the student in the foreground is Mr. John Dudley and in the back are representative of the ad hoc committee members. The Carver Theater on Washington is longer standing but is an essential part of the story and memorialized in this panel. 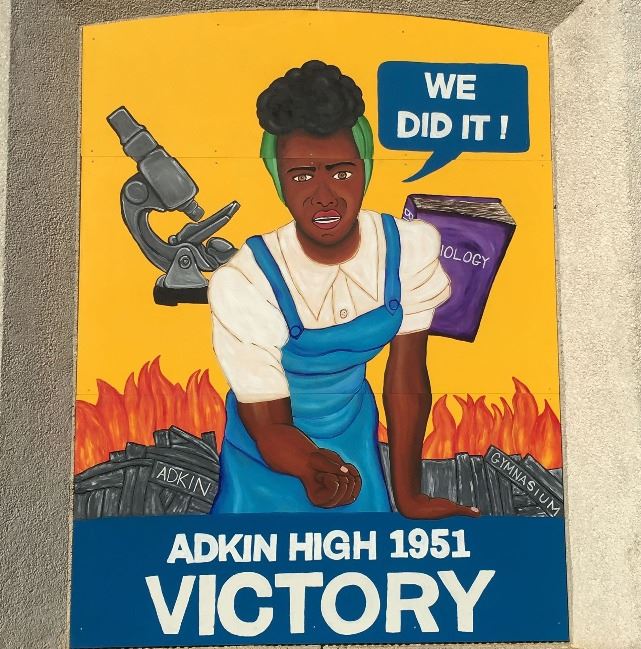 “Victory” is a propaganda-style poster, similar to “Rosie the Riveter”. The old Adkin gymnasium is burning in the background, with a single microscope on one side and used books on the other to symbolize the limited resources the students were allocated by the School Board compared to white high schools. The colors are the Adkin High School colors – blue and gold. 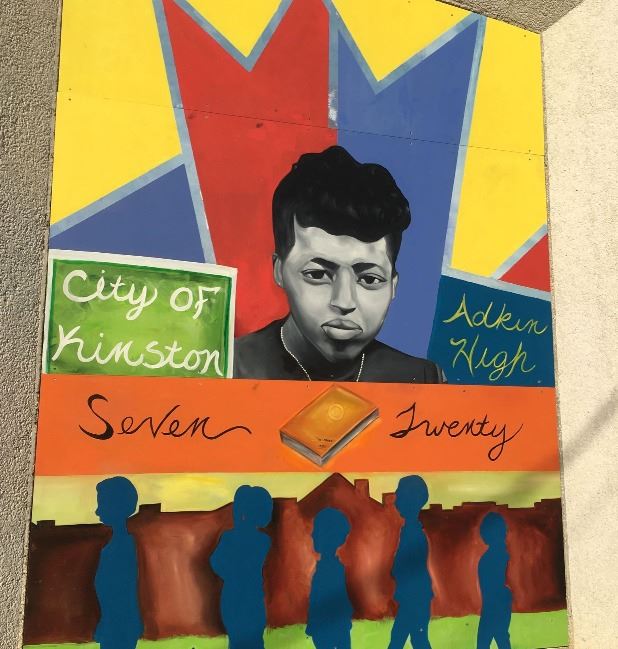 This panel has a portrait of Carolyn Coefield, and signs with the colors and names of the City of Kinston and Adkin High School to represent the involvement of both the school system and the city at Adkin High School. 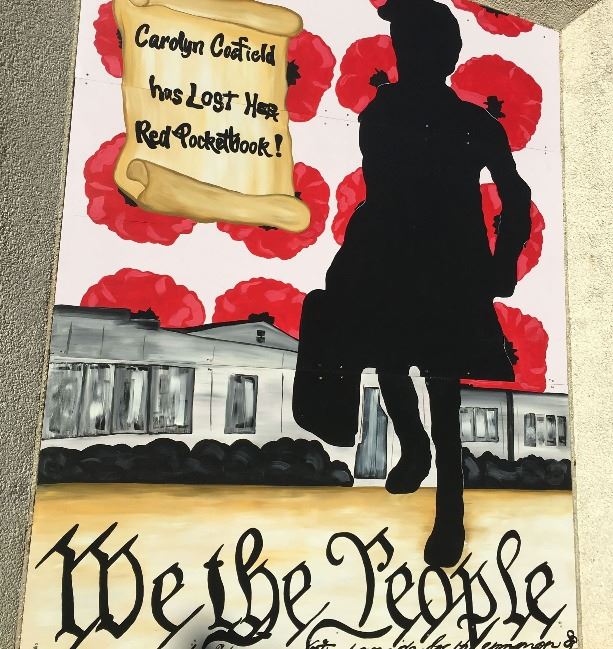 “We the People” symbolizes the students using their constitutional right to equal education under the 14th amendment (though this wouldn’t be acknowledged by the Supreme Court until 1954).   A student silhouette steps down onto the Constitution with the school in the background. Above her is the signal that started the walkout –“Carolyn Coefield has lost her red pocketbook”. In the background are poppy flowers, which represent peace, remembrance and beauty. 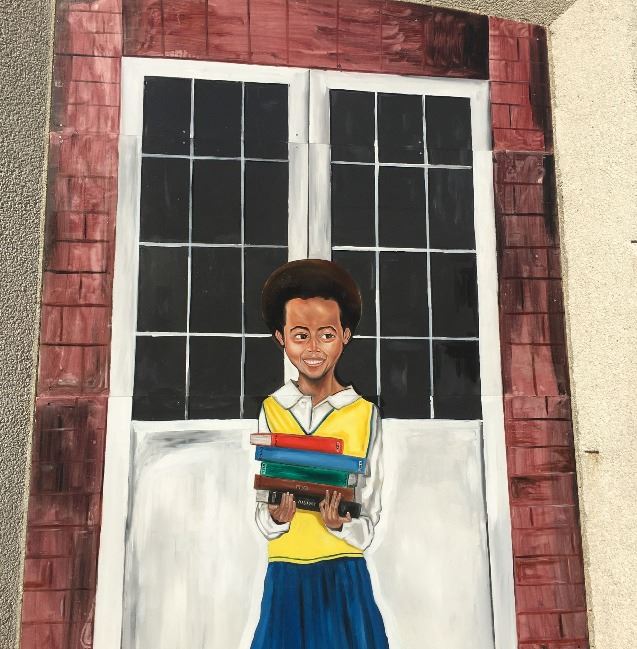 “Grace” shows a student walking with a stack of books. On each book there’s a stamp that says ‘used’, representing how most of the educational materials at Adkin High School were used; in spite of that the students held their heads high and continued to learn like everyone else. 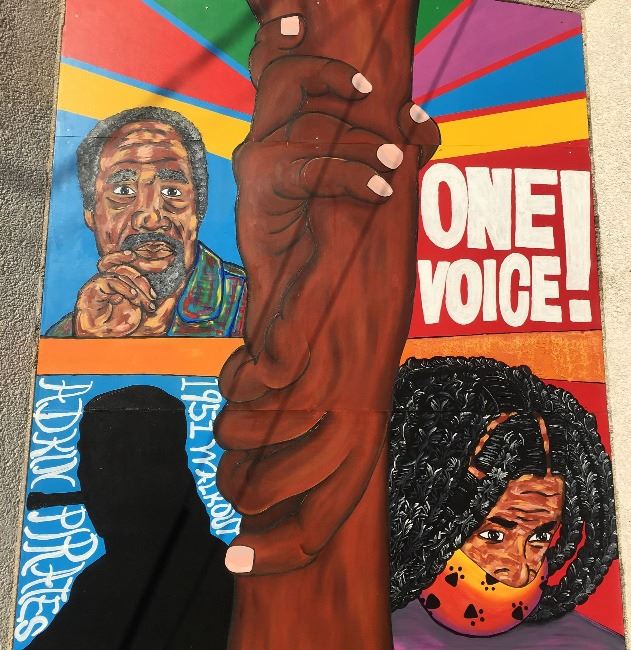 “One Voice” represents how the actions of the Adkin High students are still felt by current generations. In the center, hands are clasping in unity, one generation helping the other along. On the left side is John Dudley, one of the students who planned the walkout, and on the left is Olivia Moore, a 16 year old student who organized a Black Lives matter protest in Winston-Salem, N.C. The color purple through the mural represents unity between the two generations. In Maximillian’s words, “The past makes way for the future”.

Special thanks to Charles Hannibal for his consultation and support of the mural in honor of his parents, artist Manor Nobles, and to Pastor Robert Koonce with New Hope Ministries for their participation in the Downtown Kinston Mural Program

The Alice Hannibal mural honors the story of Alice Hannibal and her husband Dr. John J. Hannibal. Alice Hannibal was the first woman and African American to be elected to the Kinston City Council in 1959. She was a member of the Kinston Chapter of the NAACP Youth Council, and supported several sit-ins and boycotts to desegregate Kinston businesses. As a passionate social justice artist, she advocated for equality in the school system both in and out of elected office.

Dr. John J. Hannibal operated his medical practice while being one of a few African-American doctors in the area. His office is depicted in the mural and still stands strong. It is located on W Washington Avenue. The Hannibal family settled in an area called "Hannibal Hill". It was known as a welcoming, safe place for anyone who wanted to have a conversation, learn to read, or discuss community issues in the family library which was open to all. The mural shows the artist's rendering of the Hannibals alongside the buildings where they spent their life in Kinston. The mural is set on a tropical background, symbolizing Dr. John J Hannibal's ancestors origination from Grenada.

National Park Service Standard Drug No.2 (features the role of Alice Hannibal in the sit-ins to desegregate businesses in downtown Kinston)

Eligible mural walls were selected from willing property owners located in or near the Municipal Service District downtown (purple), and not part of any existing Historic Districts (blue and yellow). The following were chosen: